Placed in an environment at -110º for three minutes, the human body produces endorphins, which reduce pain. Sportsmen and women have been benefiting from this for a long time, and it is now reaching the general public.

Using cold to ease pain is a very old technique, which got the official stamp of approval about 40 years ago when researchers became interested in its effects. Treatments using intense cold spread through the world of sport first, and it’s now making itself felt in many other places. France currently has half a dozen chambers for whole-body cryotherapy. It’s mainly sportspeople who use them, cyclists in particular, but the general public is starting to access them too.

You spend a little less than 3 minutes in a chamber at -110º, in very light clothing but with protection for those parts of the body which cool down fastest (hands, feet, ears, mouth). And subject to monitoring, obviously. In such a short exposure, only the surface of the skin cools, by about 10º. The body stays at its normal temperature. There’s no risk for a person in good health; the air in the chamber is cold, certainly, but it’s dry and still.

The effects of cold on the body

When plunged into these icy temperatures, the body reacts by producing endorphins, which are often called the pleasure or well-being hormones, which have a pain-killing effect. The cold also reduces the size of blood vessels, and the technique is very effective for the reabsorption of bruises.

Sprains, tendonitis and muscular tears are some of the main conditions for which cryotherapy is recognised as an effective treatment. Other conditions can also be treated using this technique, and effectively, according to sufferers. A temperature of -110º is beneficial for rheumatism, muscle pain, sciatica, psoriasis, itching from various causes, and stress. Beauty therapists are interested in it as a means of reducing cellulite, without any conclusive results from the studies which have been carried out. However, those who have had the opportunity to spend a few minutes in such an intense cold report a feeling of intense well-being in the hour that follows. 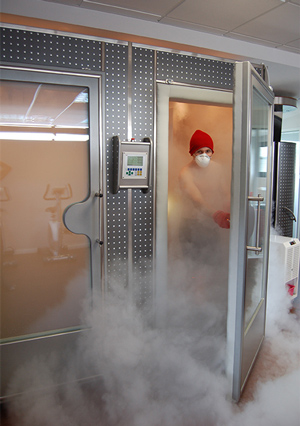